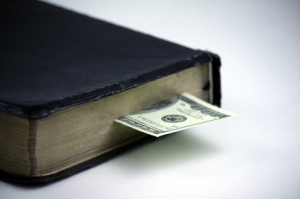 “Rich Dad. Poor Dad.” No doubt you’ve heard of this book by Robert Kiyosaki. It’s a good book with sound advice. Kiyosaki was not the first to come up with this idea though. Nope, Solomon beat him to it. The book of Proverbs is written by a father to his son and is packed to the brim with financial advice, advice coming from a rich and smart dad.

Last year I read through the book of Proverbs and wrote down every verse pertaining to money. I’m sharing the highpoints of what I discovered with you in this blog series. We’re three weeks into a six week journey. If you’re new to this blog you might want to check out part one and part two of this series.

OK, here we go with the top five financial lessons from chapters 11-15 of Proverbs…

#12 There are some situations in which money simply cannot help you.

Solomon wrote to his son, “Wealth is worthless in the day of wrath, but righteousness delivers from death” (Proverbs 11:4 NIV).

Earlier Solomon had written to his son something similar:

32 But a man who commits adultery lacks judgment; whoever does so destroys himself.  33 Blows and disgrace are his lot, and his shame will never be wiped away;  34 for jealousy arouses a husband’s fury, and he will show no mercy when he takes revenge.  35 He will not accept any compensation; he will refuse the bribe, however great it is. (Proverbs 6:32-35 NLT)

Keep this in mind… no matter how much money you have, there are times when that simply won’t be enough… be it love or war.

#13 People don’t mind those who make a profit… it’s the hoarders who are despised.

Now I know some of you may object to this principle, and it’s likely an objection that comes from a political context. Step back for a minute and think about it. Look around. For the most part this principle holds. Solomon said it like this:

People curse those who hold their grain for higher prices, but they bless the one who sells to them in their time of need. (Proverbs 11:26 NLT)

#14 It’s better to be a real nobody than to be a fake somebody.

This has a lot to do with how people use their money… and credit! Lot’s of people are in debt up to their eyeballs. Someone once said, “We buy things we don’t need with money we don’t have to impress people we don’t like.”

Solomon said: “Better to be a nobody and yet have a servant than pretend to be somebody and have no food.” (Proverbs 12:9 NIV)

Don’t use your money to buy an impression. Let your character make the impression and hold on to your money for the important stuff!

#15 It’s work, and lots of it, that creates wealth…. not fantasizing.

I’m just going to share what Solomon wrote to his son:

WHOA! Lots of people have bought the notion that a big inheritance would change their lives. Nope. It would be fun for a while, but it wouldn’t change them long term!

The man who works and saves is much more thoughtful when he spends and invests than the one who gets without working.

Oh my… Proverbs 11-13 are just JAMMED with financial wisdom… more than we have space to share here. You’d do well to pick up your Bible and take some notes from these chapters! Great advice from a father to a son!