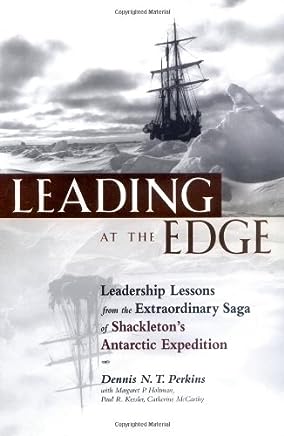 Ernest Shackleton’s adventure is one of the most noteworthy adventures of all time. This story of boldness, imagination, and rugged determination is PACKED TO THE BRIM with leadership lessons! Dennis Perkins does a fine job of distilling the best lessons from this extraordinary story!

***Disclaimer: Part Two of this book is “Case Studies”. I did not read this entire section… because I don’t particularly care about these case studies. You might though… so read away!

STRATEGY #3 – Optimism and Reality: Instill optimism and self-confidence, but stay grounded in reality.

STRATEGY #4 – Stamina: Take care of yourself: maintain your stamina and let go of guilt.

STRATEGY #5 – The Team Message: Reinforce the team message constantly: “We are one – we live or die together.”

STRATEGY #9 – Risk: Be willing to take the Big Risk.

STRATEGY #10 – Tenacious Creativity: Never give up – there’s always another move.